I met this unique lady in April, 2011. I had seen her sitting in the front row of my concerts many times over the previous years, and seemingly enjoying the music.

Inge, as she was known by the Montefiore staff at Hunters Hill, gave the impression of being cut off from communication with the outside world, and indeed, it turned out that she was suffering a mental condition which manifested itself in this way; however, under this exterior was a highly intelligent person who was literally only prepared to listen and speak to the few people who she trusted. I am privileged to say that, over the ensuing years, I became the main person to fill this role.

Inge was a teenage child Holocaust survivor, and this fact, added to by traumatic experiences later in her life, had left her indelibly scarred; however, Montefiore had recognized her serious situation and had taken her in a few years before I met her.

As our friendship grew, Inge stated that she wanted to leave whatever money she had to Israel through the JNF, and a Will was drawn up for this purpose.

Our friendship blossomed, with weekly walks and coffees, and periods of comfortable silences together, when she would sit and knit her never ending woolen scarves.

In late 2020, Inge’s health deteriorated to the point that she was hospitalized, and she passed away peacefully on 26 October, aged 98 years.

The JNF benefited financially from Inge’s estate very generously, and her unswerving support for our organization throughout the years that I knew her, in the form of attending functions, was also a mark of her love for Israel

Because of delays due to Covid, we have only recently held the consecration of Inge’s gravestone. It was attended by her son and daughter from England who are also a separate and private, but sad and intriguing component of Inge’s story.

I have lost a dear friend – rest in peace Ingeborg. 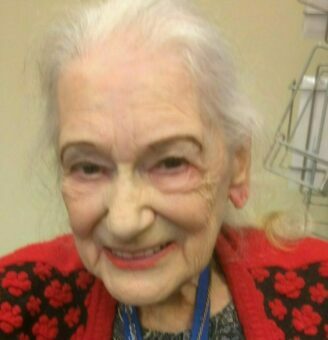