We thought we would live by the motto ‘work smarter not harder’ and interview some people about what they did in their free time this morning as a different way to start the blog.

Since we had more than 20 minutes to get ready and have breakfast this morning we used the time to get to know our tour buddies even better.

Liana used the extra time to make a hidden phone call and have a late breakfast.

Fiona faced-timed home to her daughter and asked the waiter why she couldn’t have a cappuccino,  completely forgetting that the sabbath excluded the use of machines. Fun fact…a cappuccino maker is considered technology!

The group member who will now be referred to as ‘Super Susie’ went off for a run this morning putting us all to shame as we enjoyed a sleep in and a carb overloaded breakfast. She used her time to soak up the sites of Jerusalem knowing that Noam wasn’t calling out Yalla Yalla Yalla!!!

Gabby and Paige used the longer than 20 minutes that we had to get ready to have a long overdue sleep in and the time to discuss the intricacies of life…. heads up please don’t mention the ex!

Our trusty guide Yigal was more productive than his tour group and went to the Synagogue which is his normal Sabbath routine.

Lorraine lived up to the 5 star standard of this hotel and had her live-in-maid (AKA  Alison) bring her a cup of tea in bed.

If you need to know what’s going on today we suggest that you ask Allison as she used the extra time to read the itinerary. Who knew it had so much information to offer!

Don’t sit next to Cherie on the bus as it’s taken her 2 days to figure out how to use the shower but rest assured the younger generation came to the rescue and she has managed to not only shower but also wash her hair. She’s sure to stop traffic as we head out on our walking tour today.

Fiona (aka Princess Fiona ) realised that it is not summer like in Sydney, just before deciding to dive into the empty hotel pool. She also informed us that she will be looking glam today as she has now planned her outfits for the day and New Year’s Eve. So be ready as the Karaoke Queen will be blowing her horn to bring in 2023!

Ingrid tried to use the time difference to navigate her way around the shabbat rules in order to catch up with family and friends.

Avril went for a run at 6 AM (in her dreams), when she woke up, breakfast was the order of the day, carbs and more carbs much like the rest of us with the exception of Super Susie of course.

Rebecca and Sally discovered that their mid-afternoon mimosa would have to wait until the evening after remembering that it was shabbat and all the bars were closed,  instead they used the time to wash their hair and enjoy sleeping in.

Elana took the time to wash her hair and connect with family and her beloved puppy.

On a separate note, could you please promptly fill in the ‘have your washed you’re hair in the last 24 hours’ survey that Justine will send out today, as we found it quite concerning that so many of you hadnt done this in a while!

Now onto the reason that we have this blog… the religion, culture and history of Jerusalem.

As we commenced the tour there was a different vibe…it could have been the smile on Noam’s face or the slower relaxed pace to the tour. Some of us questioned as to whether Noam had been replaced by a doppleganger!

If you have walked past the YMCA building just up the road from our hotel, you would be surprised to know that it was designed by the same architect as the Empire State Building. Apparently this knowledge was not new to Danny who was able to correctly answer Noam’s question and earn himself a prize. For 40 shekels you can actually go the top of the YMCA building for some great views of Jerusalem which is pretty good value.

Opposite the YMCA building is the King David hotel with a mysterious low ceiling floor which apparently is used for security purposes and by Israeli snipers. If you don’t believe us check it out next time you walk past. Look up and count the floors!! Intetesting fact- American Presidents have stayed in this hotel. It was bombed in 1947.

Noam also took us to what is known as the hotel corner which boasts 4 of the best hotels in Jerusalem.  This corner has expensive shops that are popular on Saturdays for people looking to save money! Noam told us he only takes his wife there on Ssturday!

Our tour of the Christian and Arab quarters was quite inspiring and informative, with the sound of christmas carols, church bells ringing and the Muslim call to prayer following us as we explored this beautiful and unique area.

We followed the Via Dolorosa which tells us of the processional path that Jesus was forced to take after he was condemned by the Romans and crucified. The images at each station were quite moving  especially the one where Jesus is met by his mother along the path.

We also visited the Church of Flagellation where the Jesus’s crown of thorns is shown as a beautiful mosaic on the ceiling.

As we made our way through the streets of Jerusalem we were overcome by emotion as we saw the different religions of Judaism, Islam and Christianity come together, peacfully celebrating and worshipping in their own way. There was much emotion within the group particularly as we entered the Church of the Holy Sepulchre, which is believed to be the site of Jesus’s burial and resurrection.

The tour of the Jewish neighbourhood started at the King David Hotel which was bombed in July 1946 by the Jewish underground military movement, Irgun, using 350 kg of explosives resulting in 91 deaths. This event although steeped in controversy resulted in the decision by Britain to withdraw from Palestine.

Our next stop were the neighbourhoods of Mishkenot Sha’ananim and Yemin Moshe, established in 1892 by the Montefiore welfare fund as a solution for the overcrowded and unsanitary conditions inside the walls.

We joined Yigal on his personal journey down memory lane: through his childhood neighbourhood and past his family home – what it meant to grow up in Jerusalem and the painful memories of living through the terrorist attacks between 2000 and 2004. Yigal remembers his mother forbidding them from travelling on public transport as buses were targeted by suicide bombers. Yigal lost a close friend Nava, and her father, who died one night before her wedding in an attack on the restaurant at which they were celebrating.

The need of the government to protect the country’s citizens from terror attacks resulted in the building of the wall between Arab and Jewish areas. This decision was not taken lightly and to this day is a cause of political discourse. We continued walking through the beautiful German colony and the Greek community centre. The German Templers Moshava (settlement) was established in the late 19th and early 20th century during the Ottoman rule of Palestine.

Today all these Moshavot are upscale neighbourhoods surrounded by gardens with panoramic view of the Old City walls.

To end the tour we were surprised to be directed to Yigal’s sister’s beautiful apartment for a scrumptious Kiddish with all the trimmings.

As heard by a group member today “Jerusalem is a melting pot of different religions.”  After just a few days in Jerusalem I’m sure that we would all agree it is a it is a truly spiritual and unique place. 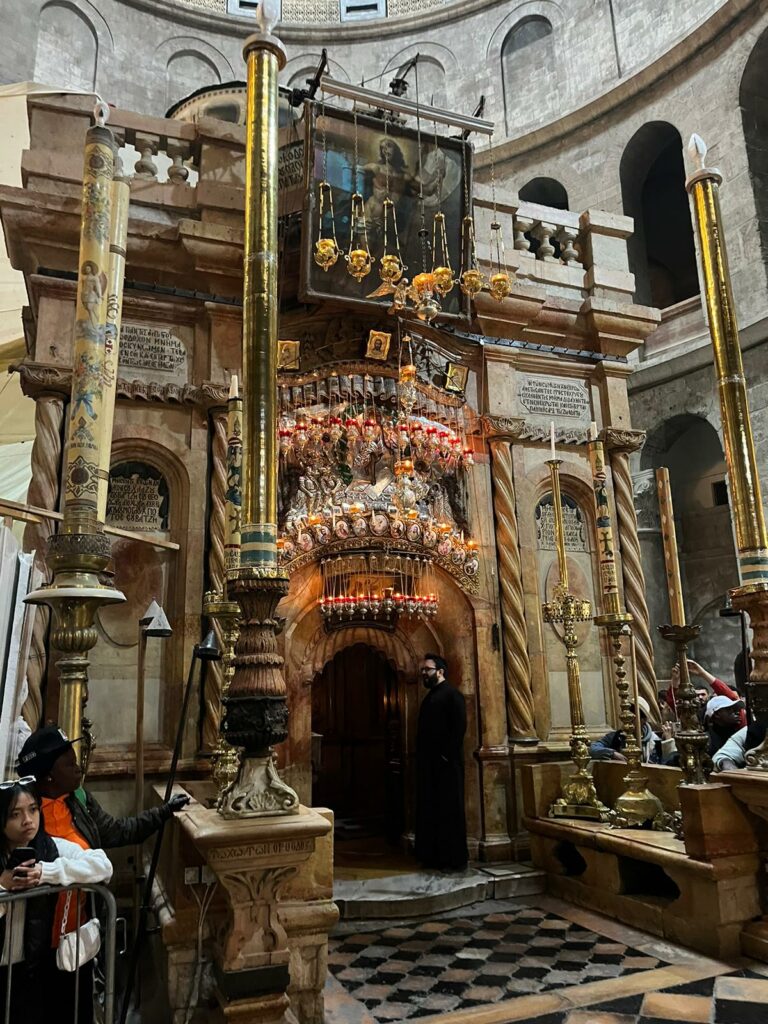 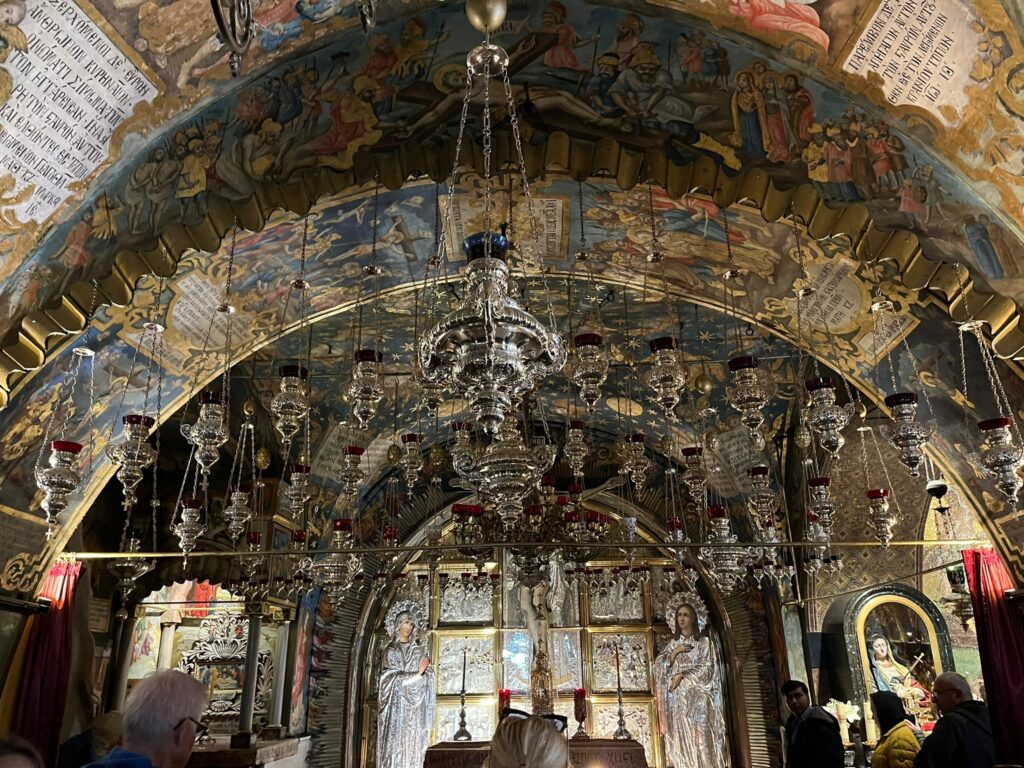 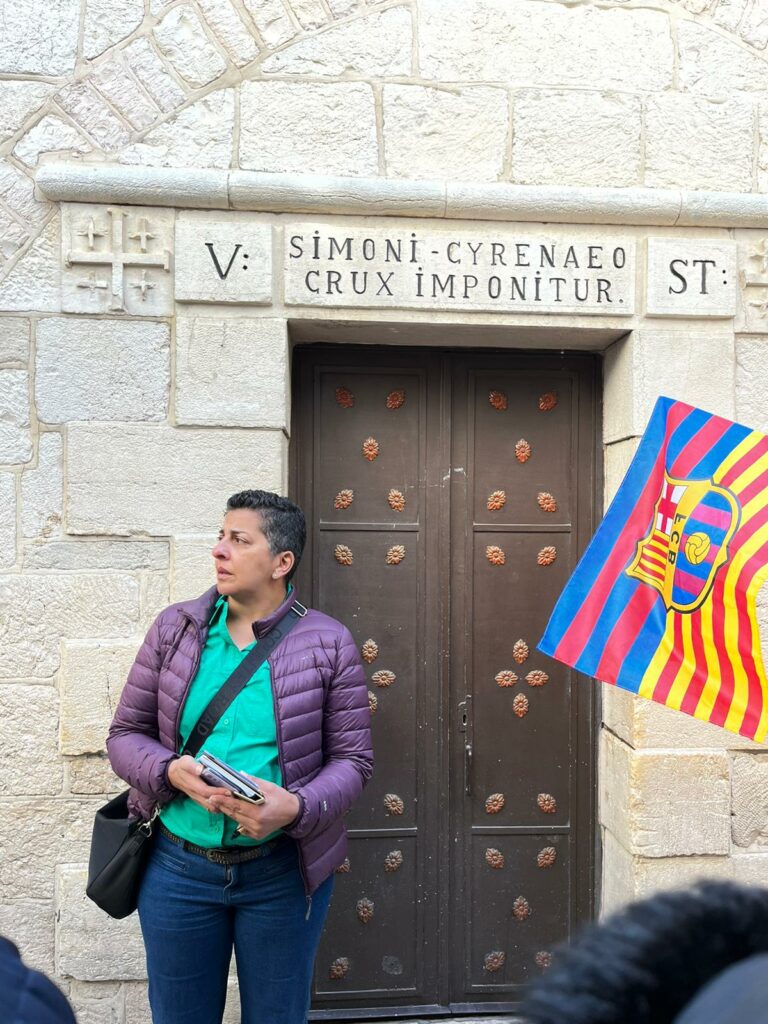 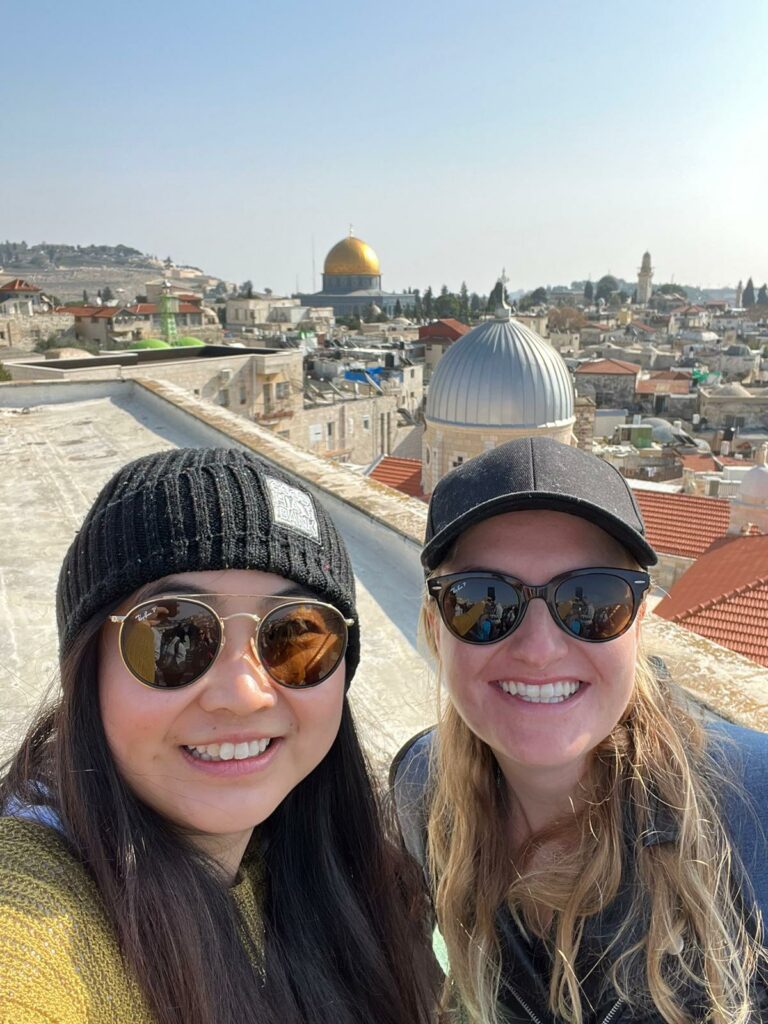 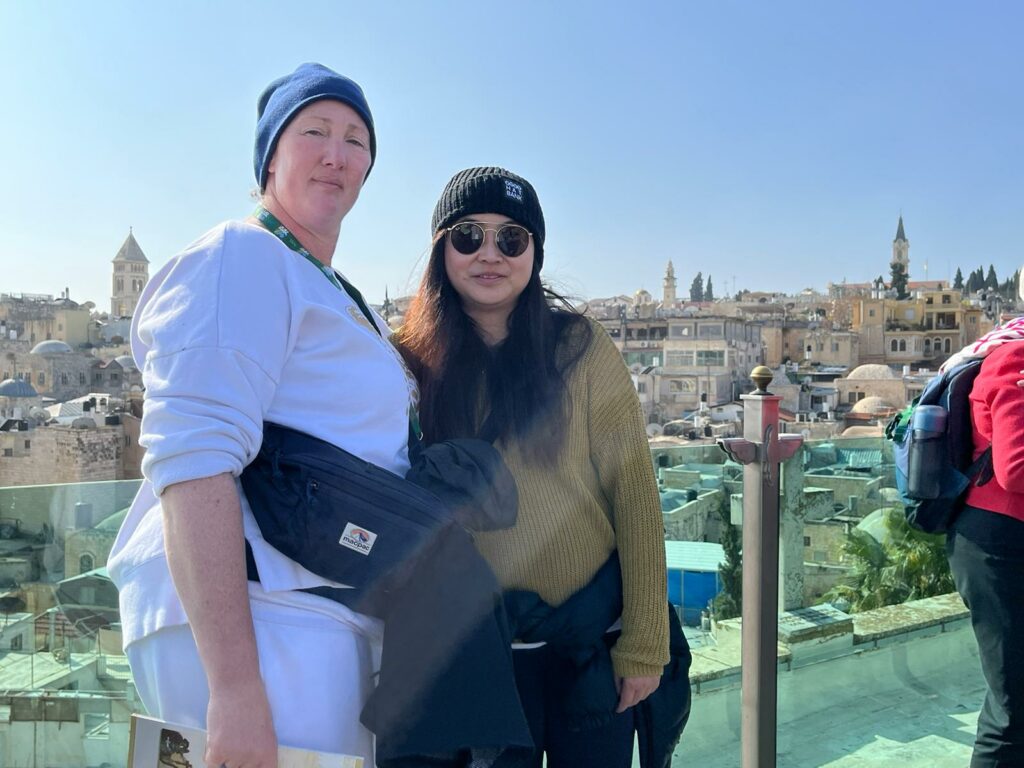 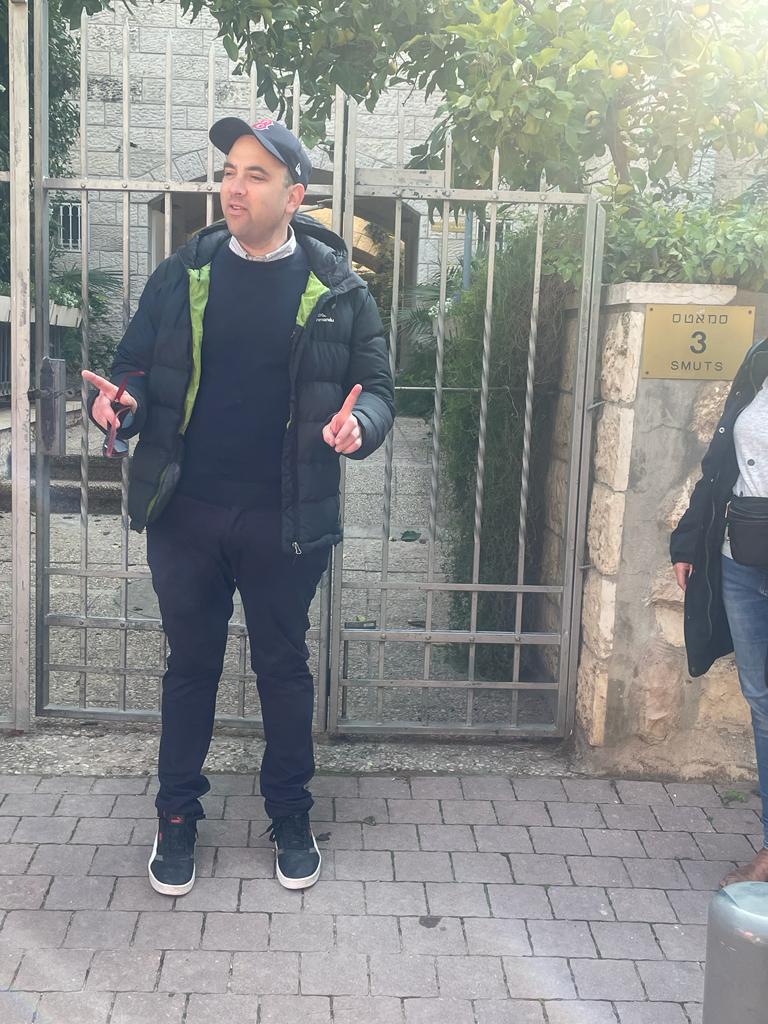 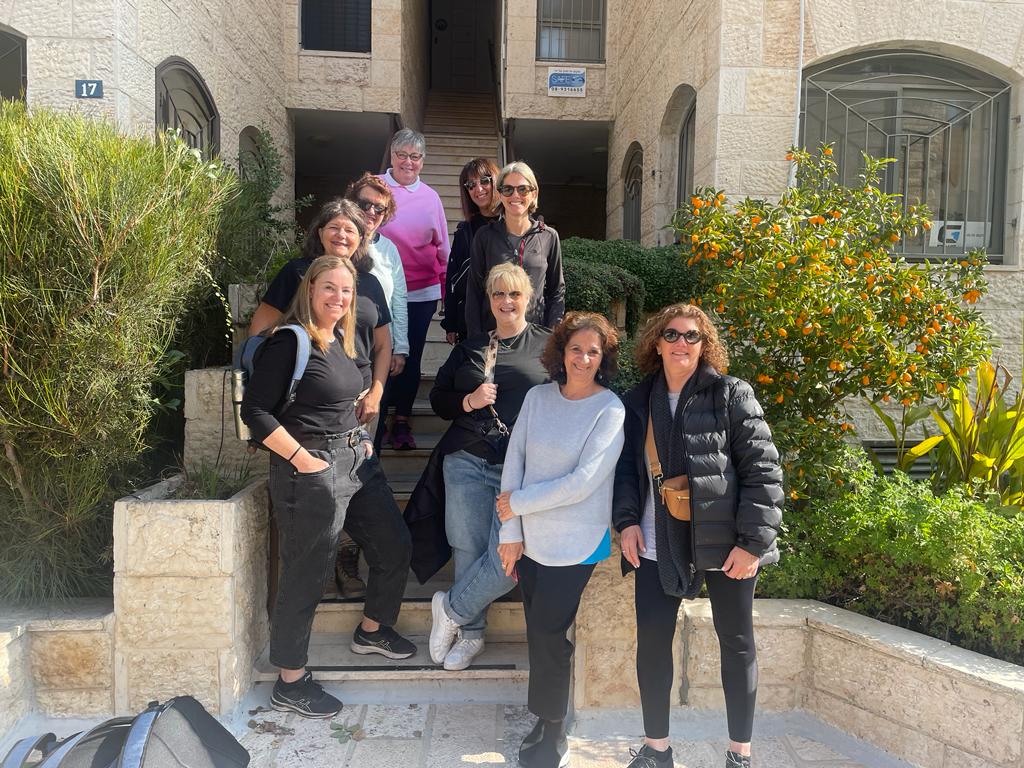 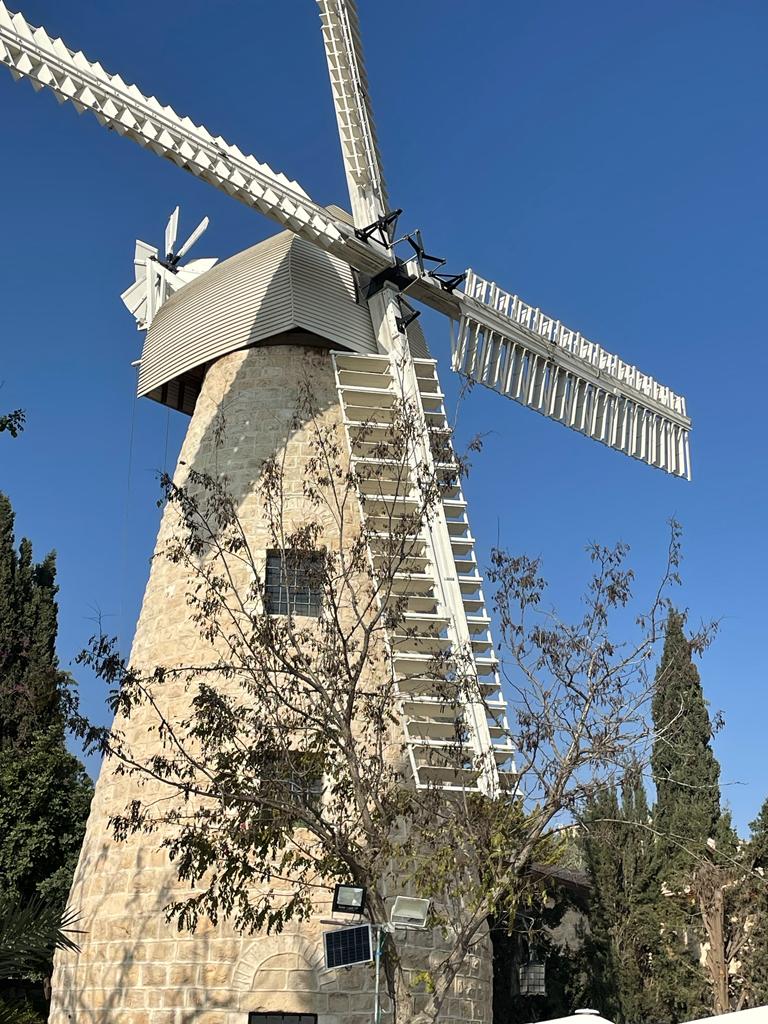 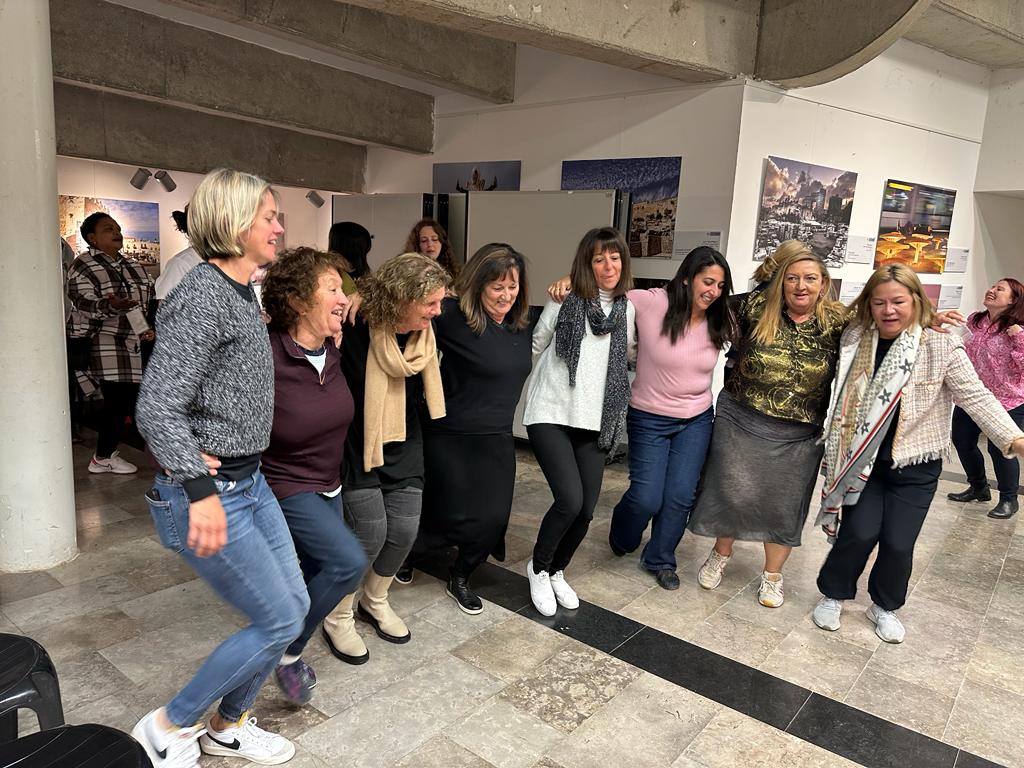 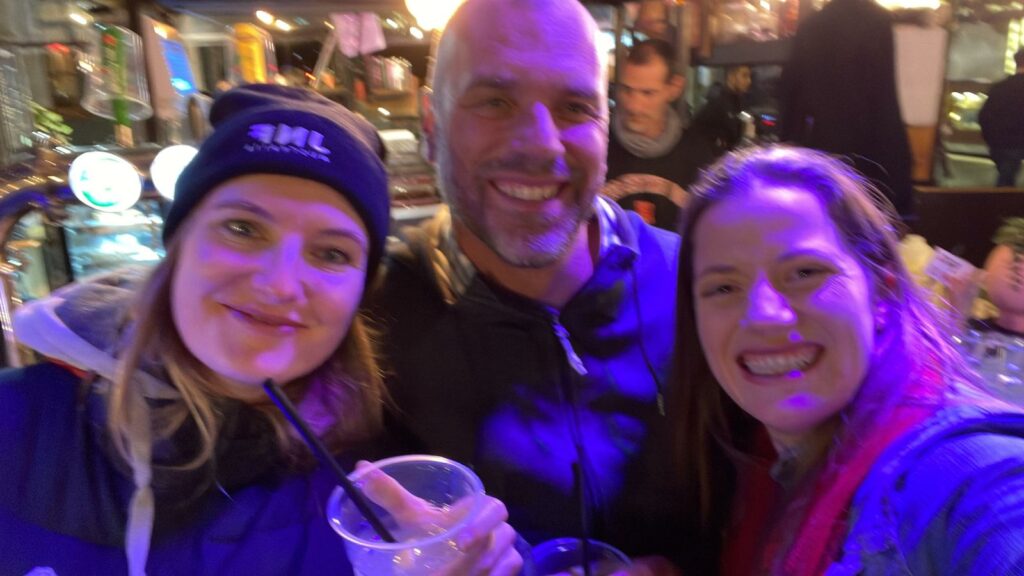 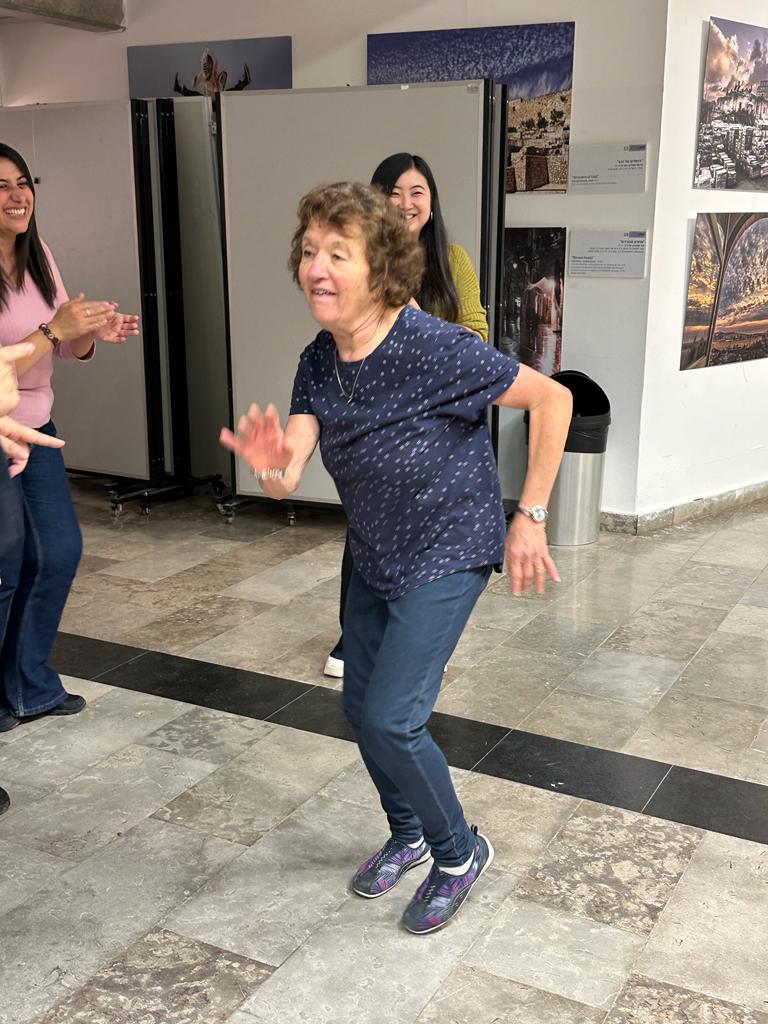 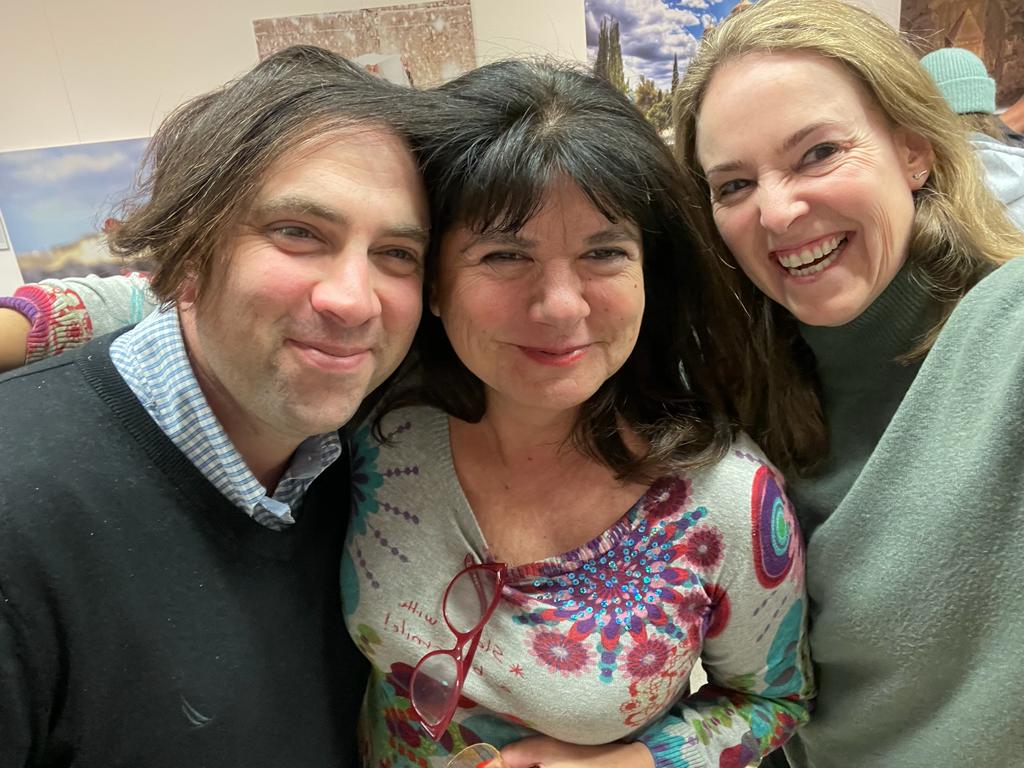