Catherine Glück was born in Hungary in 1906 to Maximilian and Julia Lamberger (nee Leitner). Her brother Frederick was born the next year.  Catherine was a fine student and was honoured at her school, the Mester Utca Commercial High School for Girls, as “Most Outstanding Student of the Year” in 1924.  She was a resourceful young woman and tutored other students to earn money for holidays.  She subsequently gained work as a shorthand secretary (a skill she and her brother excelled in).

In 1929 she met and in 1930 married Béla Glück, an architect, at the Dohány utca Synagogue in Budapest.   Theirs was a happy union, full of friends and social activities including sailing their yacht, visiting the theatre and holidaying in the mountains.  Together they developed the Hungaria Strand Furdo resort, a recreational facility in Budapest, where Béla was the chief Architect.  Catherine studied English and set up the highly successful “Glück Domestic Agency” sending girls from Hungary and Belgium to England as domestic workers.

In 1939, following the passage of anti-Jewish legislation, the resort was confiscated and Agency closed down.  Sensing the coming danger, the young couple made plans to leave Budapest for London on 3 September 1939.  War, however, broke out on 1 September, preventing their departure.

Catherine and Béla were separated and Béla was sent to a Hungarian Forced Labour Camp.  Catherine was obliged to survive as best she could in the Budapest ghetto and when Jewish women were made to leave the city she escaped by disguising herself as a non-Jew.  Following the liberation of Budapest by Soviet armed forces, she managed to escape by train to Austria.  Through a combination of determination and good luck, she made her way to Paris where she was reunited with her beloved brother Frederick, an officer in the U.S. Army.  She later travelled back to Hungary only to learn that her husband Béla planned to re-marry and she returned to Paris alone.   Again, proving her intelligence and resourcefulness, she earnt a Diploma of French Language at the famous Sorbonne University in Paris and worked as a stamp dealer, establishing the Societé Inter-Philatelié in Paris in 1947.  In 1950 Catherine and Frederick left France to make a new life in Australia.

In Australia Catherine worked as an Insurance Agent and as an interpreter and translator for the courts in Sydney.  Frederick was an artist and illustrator whom Catherine proudly wrote about in her 1990 book “Frederick B. Lamberger, The Man and his Art”.  Catherine became an Australian citizen in 1957 and, thereafter, enjoyed trips through Europe, Asia, USA, Japan and South America and, on many occasions, Israel.  Although she enjoyed friendships with male friends, she never re-married.  In 1986 her beloved brother Frederick passed away.

Catherine wrote of her childhood and wartime experiences in her book “The Girl with Long Hair” and it illustrates her enduring zest for life, undimmed by her traumatic wartime experiences.   She was an enthusiastic supporter of many JNF campaigns and projects and, in 2001 she was awarded both the Centenary Medal for her charitable work for the disadvantaged and a Medal of the Order of Australia (OAM) for service to the community in NSW, particularly, the Jewish community, as a philanthropist.

As Catherine said, in “The Girl with Long Hair”, of the events of her life:

“How absurd that one should be persecuted because of  a religion into which one was born, following the parent’s ways and respecting their traditions. When one walks around the botanic gardens there are all the trees, shrubs and plants of different height, variety in the leaves, diversity of shades of green. They live next and near to each other in harmony, peace and flourish. Why can’t people do the same?”

There can be no fitter memorial to Catherine than to know that her generous bequest to the JNF has been used to beautify the land and environment of Israel for its people, in all their diversity, to enjoy. 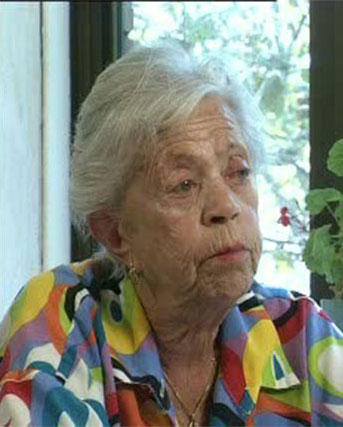