Today, we took the highway to the danger zone (you’re all singing it now, right?).

And, if you ask us how it was, we’ll say “like bombs to the eyebrows” – ptzatzot lagabot! – amazing, excellent, wonderful!

In fact, as the day progressed the literal translation of Yigal’s ‘Hebrew phrase for the day’ became ironically more relevant than we first thought, and our ‘structure for the day’ was undoubtably the ‘bomb shelter’.

First stop – Beit Alami, named after the wealthy aristocratic Arab family who built the house – it’s known as ‘The Arab House’ by the people of the surrounding Kibbutz Zikkim. The house is 60km south of Tel Aviv and just a few kilometres from the Gaza strip, which you can clearly see from the roof.

The 14 members of the Alami family lived in the house with their seven servants until 1947 after the War of Independence. Thereafter, the house went through several changes. It was populated by Romanian immigrants in 1949. Some time later, Brazilians came to live there and added the swimming pool and bikinis (thus the Brazilian), and then in the 1980’s the house was used as a pub, famously playing loud, American music.

Donations from JNF-Australia contributed to the restoration of the house, which features magnificently rejuvenated painted ceilings and original floor tiles. There are currently 600 people living on the surrounding Kibbutz. Each house has a reinforced room and above the children’s houses looms a concrete shell that protects them from incoming missiles and bombs. The Kibbutz manufactures mattresses and produces dairy, and there are even peacocks roaming around. We heard about the security issues that they experience when rockets are fired from Gaza, including stories about dairy cows being killed and damages to the mattress factory, tractors, and the local petrol refinery.

This moshav is right on the border with Gaza and just a stone’s throw from the defensive walls that separate Gaza from Israel. There are 250 families living here and for the past two decades they have suffered the trauma and terror associated with ongoing rocket attacks.

We heard from Tsameret Zamir who told us that residents have only five seconds to get to a bomb shelter when the ‘red colour red colour’ alert rings through the speaker system and that often parents don’t know whether their children have made it to a shelter in time. They also experience threats from snipers, which has resulted in the creation of an escape road, masked by rows of strategically planted trees. Occasionally the Moshav also gets caught up in the crossfire when the IDF sends rockets back towards Gaza.

Tsameret told us that during periods of high alert, she only wears sport shoes because she never knows when she will need to run to a shelter, and she always watches the sky when she’s driving and keeps the windows open and the radio off so that she can hear the warning sirens. One of the shelters across the road from her house has a swallow’s nest inside it! Every house in the Moshav must have a safe room with special glass that doesn’t shatter. Some families often sleep in the safe room, just to be ready.

Despite all of this, Tsameret describes the community as ‘a strong family together’ and talks about how connected they all are. She has pioneered the most incredible project – Path to Peace, creating hope together – giving individuals the opportunity to choose a colourfully painted mosaic tile, write a personal wish on the back, and glue it to one of two security walls on the Gaza border. As well as sticking our own tiles on the wall, we added some tiles that were painted by residents from the Montefiore Aged-Care Home in Sydney.

This magnificent oasis in the middle of Sderot, was founded by JNF-Australia. It’s a 12-acre park featuring an array of incredible playground equipment, all surrounded by dozens of beautifully decorated bomb shelters. These are all locked and open automatically when air-raid sirens are activated in the area.

We heard from the Mayor of Sderot, Alon Davidi, who spoke about his own family life and the trauma that his children have experienced in the wake of rockets fired from Gaza and having to run to shelters. Alon spoke about the many JNF programs including educational and ecological initiatives, and how the JNF has assisted and supported the wellbeing of the Sderot community.

A quick nod here to the many who demonstrated their musical talents (or lack thereof) on the very cool outdoor piano and to Lorraine’s amazing Ninja Warrior demonstration (yes, there’s a video!).

The Sha’ar Hanegev High and Elementary School is located in the heart of the Gaza envelope bordering the Gaza strip and right in the firing line when rockets are shot over the border.

Every classroom in the school is a bomb shelter.

This is where we met (the imposter) Yigal, who introduced us to the High School.

We were taken on a tour of the Elementary School and hi-5’ved the kids as they were making their way to the buses, which took them back to their Kibbutzim at the end of school day (wouldn’t we all love it if the kids went home at 1:00pm in Australia!).

We were all inspired by the outdoor rocket ship library, the extensive kitchen garden, musical playground, and the giant posters featuring the words of thoughtfully selected Hebrew songs.

The South African group joined us in the Australian outdoor classroom where we sang our national anthems and marvelled at the maps on the wall showing that Tasmania had been re-attached to the mainland, and that the only white people in Australia live on the east coast, and surf.

The visit to Kfar Aza – a Kibbutz less than a kilometre from Gaza, was an eye-opener. We couldn’t help noticing how ‘normal’ the backyards looked with bicycles and soccer balls everywhere – and then there were all the safety rooms, bomb shelters and the constant sound of overhead drones.

One of our guides, Yahel, talked about the 14 kindergartens that he was working on rebuilding at kibbutzim around the area, to make them more missile-proof. It’s an ongoing process to be one step ahead of Hamas and the new types of missiles that are being developed, to ensure the safety of the Israeli communities.

Our other guide, Ralph, showed us the bomb shelters added to each house and pointed out shelters in the swimming pool area, car park and cemetery. He talked about always being on edge and the many triggers that unnerve him and his fellow Kibbutz members.

It was fascinating to learn about Israel’s Iron Dome technology and how it intercepts rockets fired from Gaza, and to hear about Israel’s defences against attacks through underground tunnels. We were told that in recent years, hundreds of rockets have been fired from Gaza all at the same time, in efforts to confuse the Iron Dome.

It was quite surreal to hear all of this while standing at the Kibbutz fence, looking across the peaceful green farming and agricultural fields to the city of Gaza.

Just as the sun was setting, we made it to Beit Eshel, east of Be’er Sheva.

Noam managed to pack a 45-minute tour into 15 mins by calling out to those of us who were making their way to the toilets, to keep their whisper audio guide system on while they were in there!

In 1943 a handful of people set up a tent and some equipment on this JNF-owned land. They studied the weather, built a well and set up a small experimental garden. Soon there were 25-30 people living here and before too long the area grew into a kibbutz.

The main structure was a central yard and the kibbutzniks lived in tents around the yard.

On 14 May 1948, war broke out and while the children of the kibbutz were evacuated, the residents stayed to fight the Egyptians, building bunkers and trenches. A few months later, the real army arrived and all the people from the kibbutz went north and built a moshav called Kfar Hayogev.

Today, the site of Beit Eshel is used as an educational resource by KKL and tells the story of a brave pioneer settlement in the Negev.

After learning so much about the Jewish connection to the land of Israel and the determination of Israelis to protect their land and live defiantly in the face of constant threats from their neighbours, it was time for us to learn about the Australian connection to Israel. Many Australians would be surprised to know that there is a connection – and it’s a fascinating one.

At the Be’er Sheva Anzac Memorial Centre, Colin told us the incredible story about the men of the 4th Australian Light Horse and their conquest of Be’er Sheva on 31 October 1917.

We were transported to the battlefield under the command of British General Edmund Allenby who reorganised the troops and planned a series of manoeuvre warfare attacks on the Ottoman defensive of which Be’er Sheva was the first.

We were told all about how rowdy, misbehaved, and recalcitrant the ANZACs were!

In a video enactment of the battle, we watched as the 4th Light Horse jumped the Turkish trenches before making a dismounted attack. Conquering Be’er Sheva was the first step of an offensive that ultimately let to the British capture of Jerusalem, six weeks later.

When the video ended, we were surprised to find that an elevator had lifted us slowly during the performance and the doors opened to reveal a balcony, overlooking the British cemetery where many Australian men are buried.

We encourage anyone visiting Israel to experience this wonderful memorial.

Finally, we headed towards some wine – we mean, dinner – and found ourselves at The Butchery – which would have been a bit daunting for the vegetarians! A delicious meal (and did we mentioned, great wine?), which felt like a celebration, and then an absolute treat to have Princess Fiona take over the microphone on the bus for the ride home, congratulating us for emulating the badly behaved ANZACs(!) and making the ride totally entertaining! 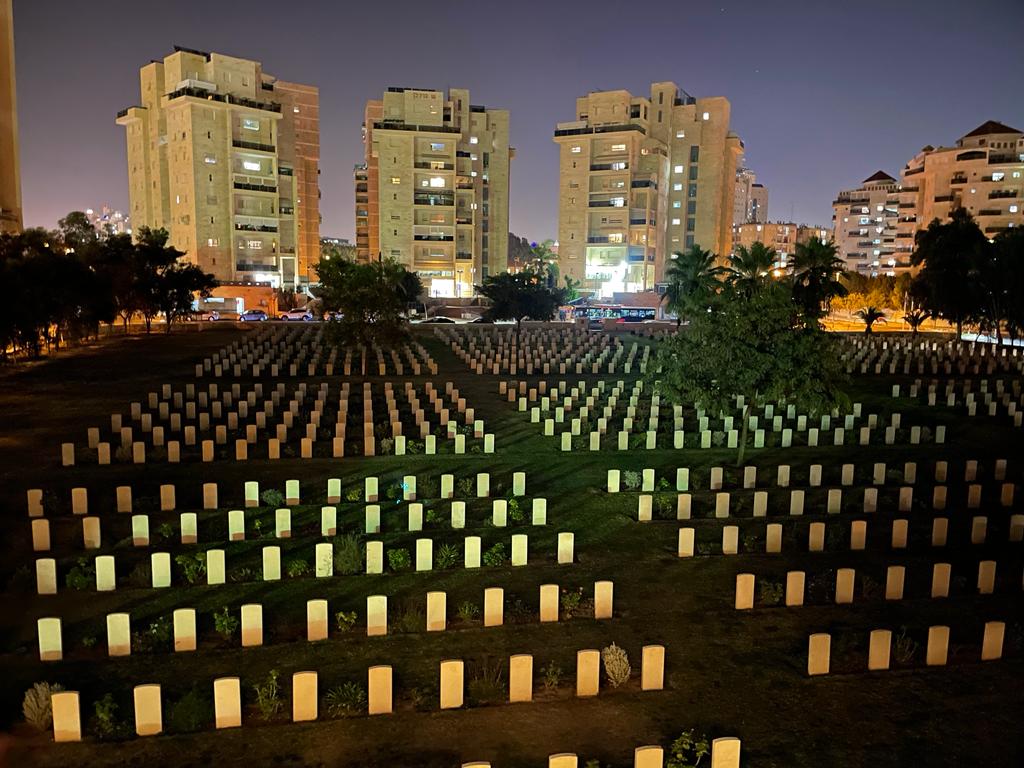 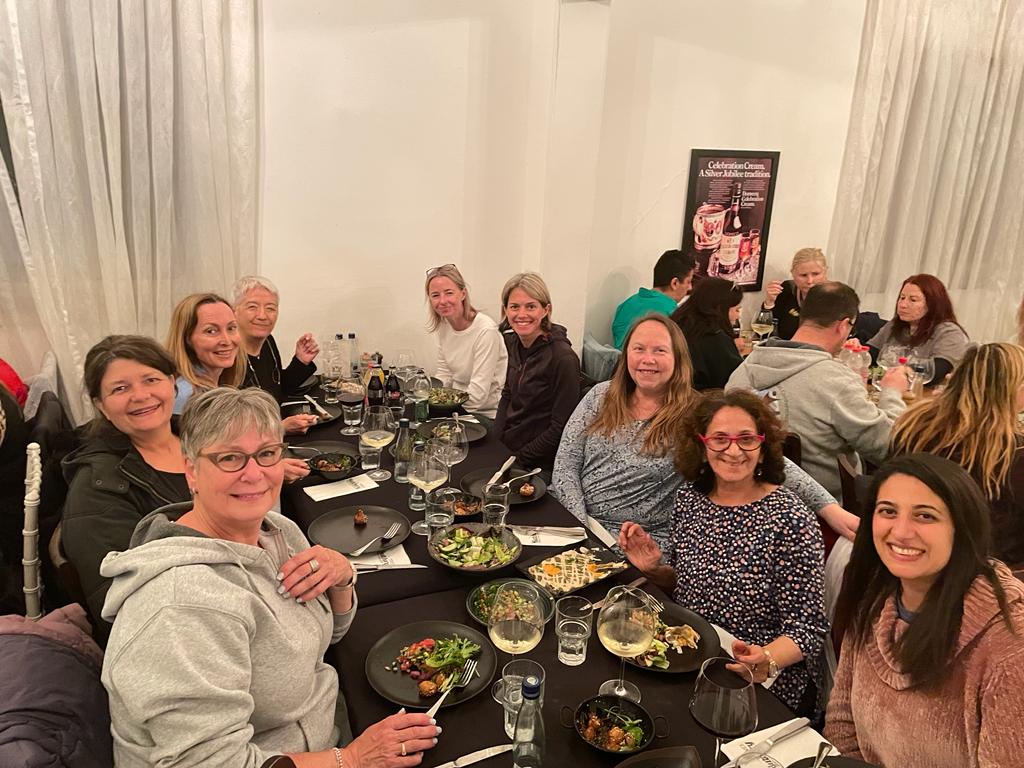 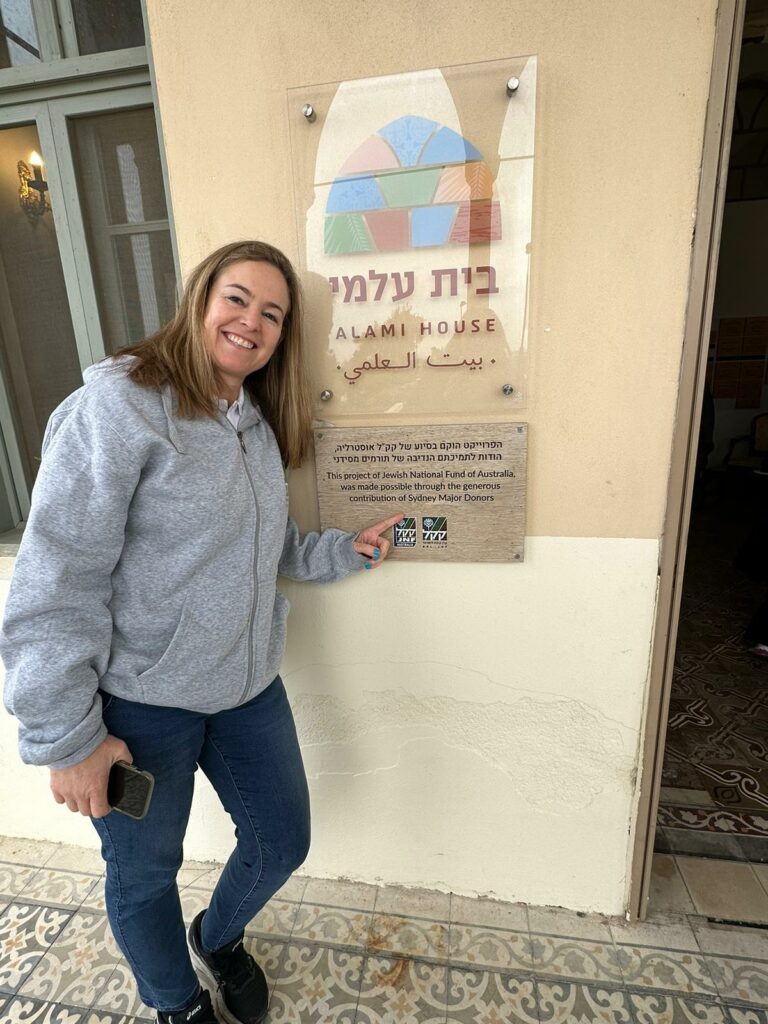 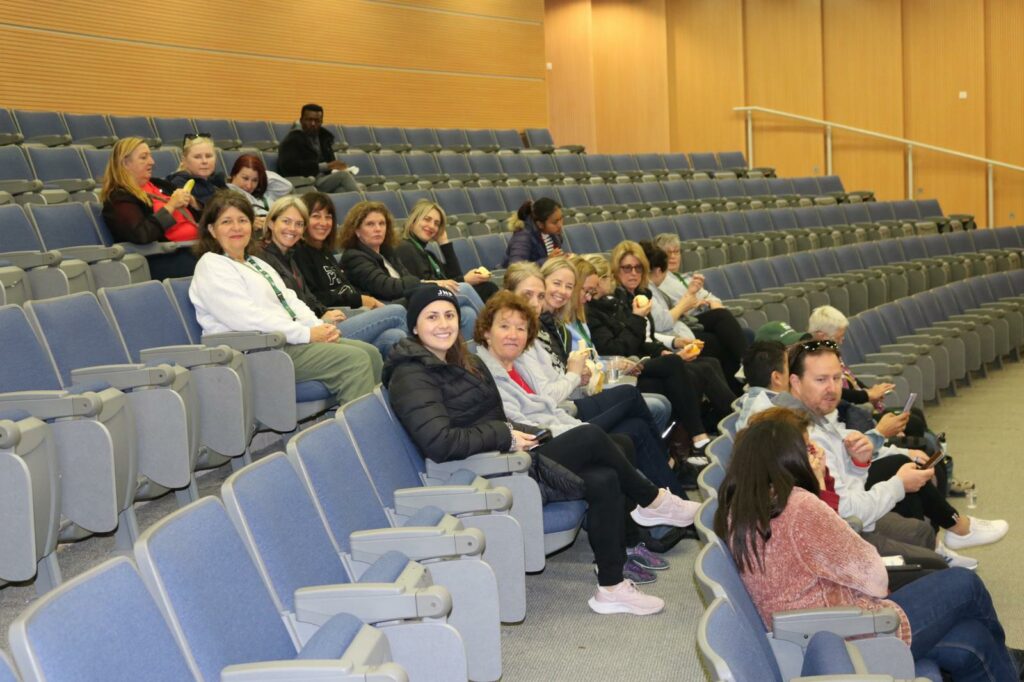 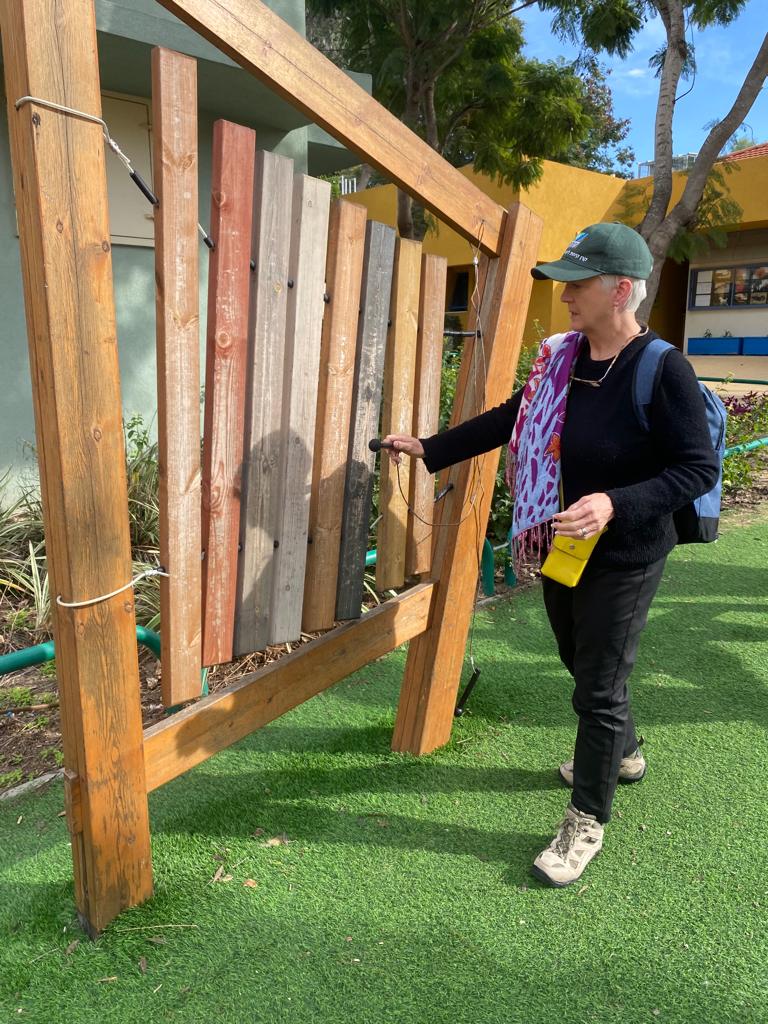 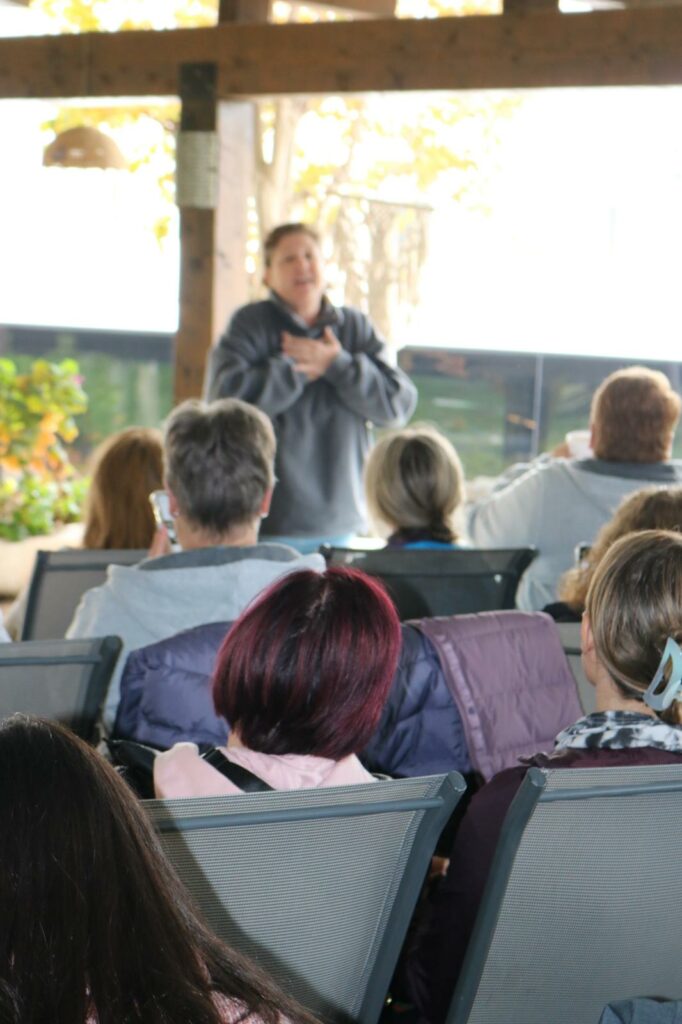 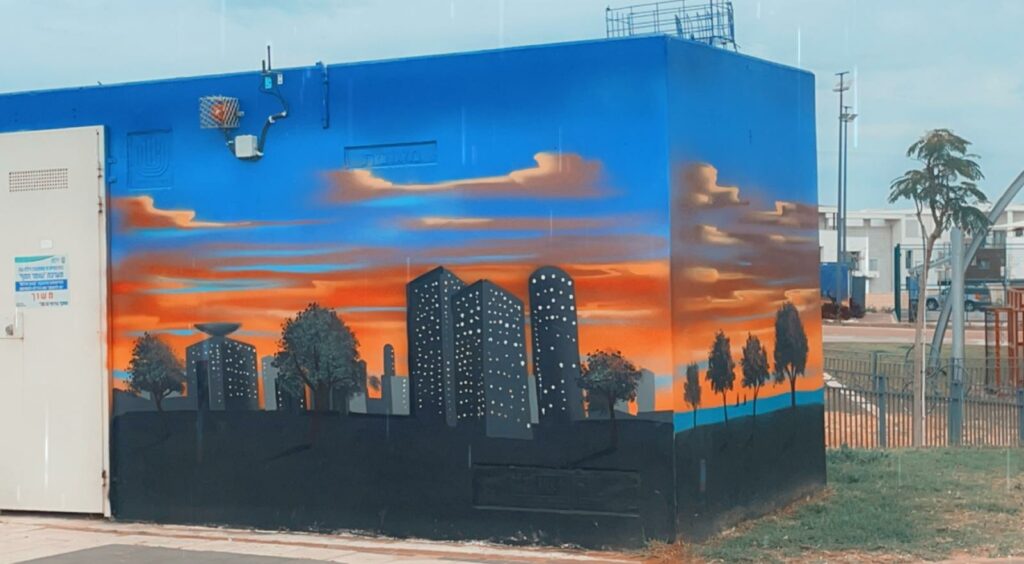 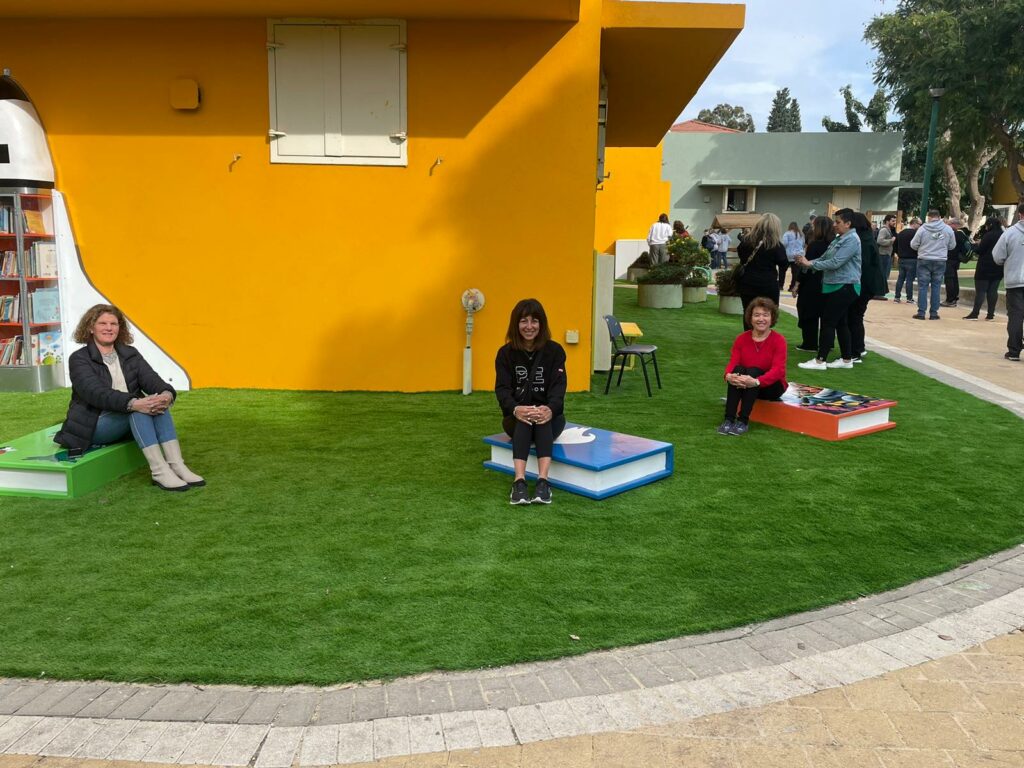 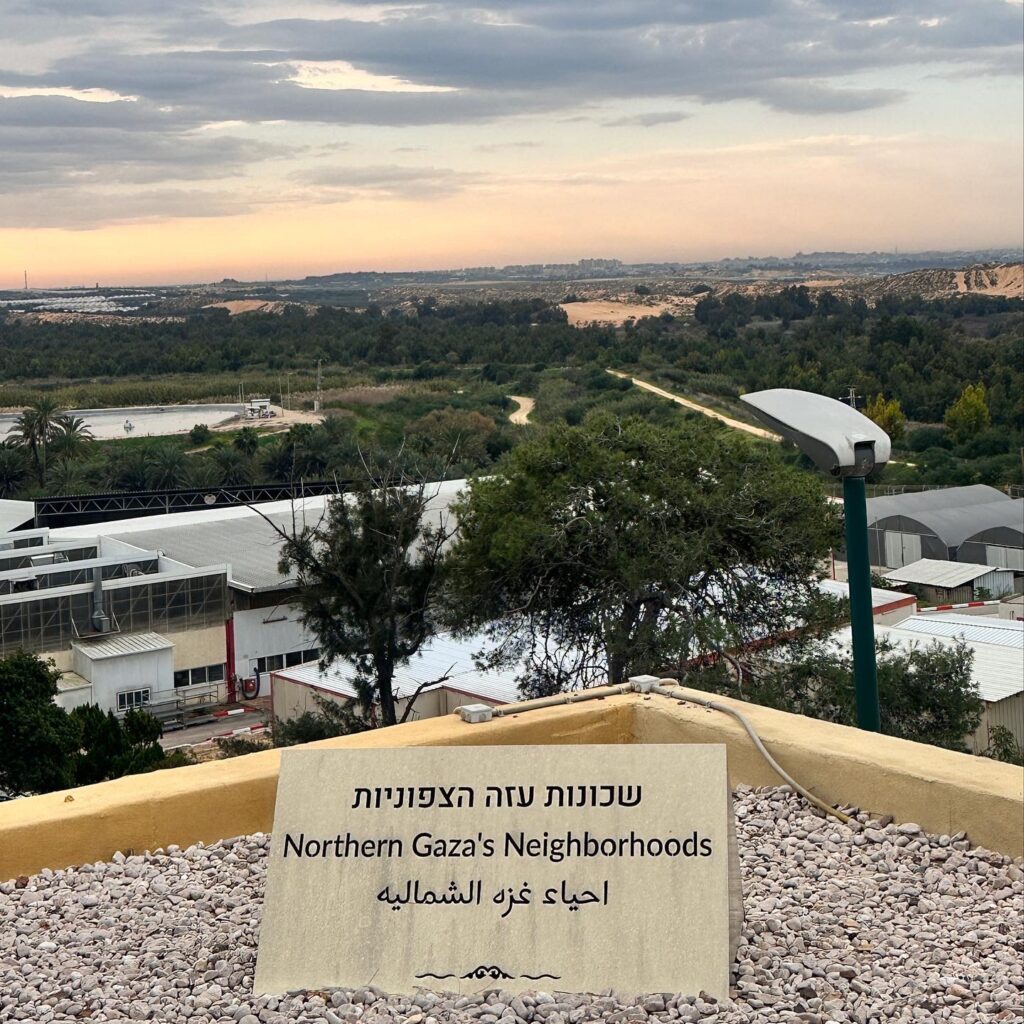 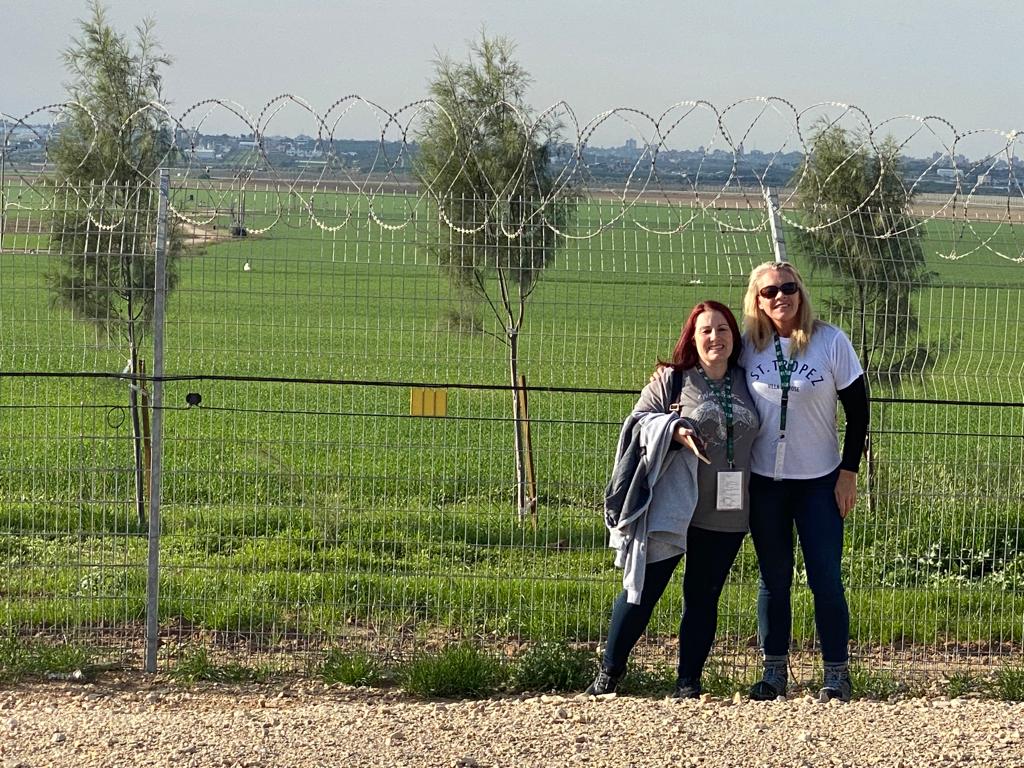 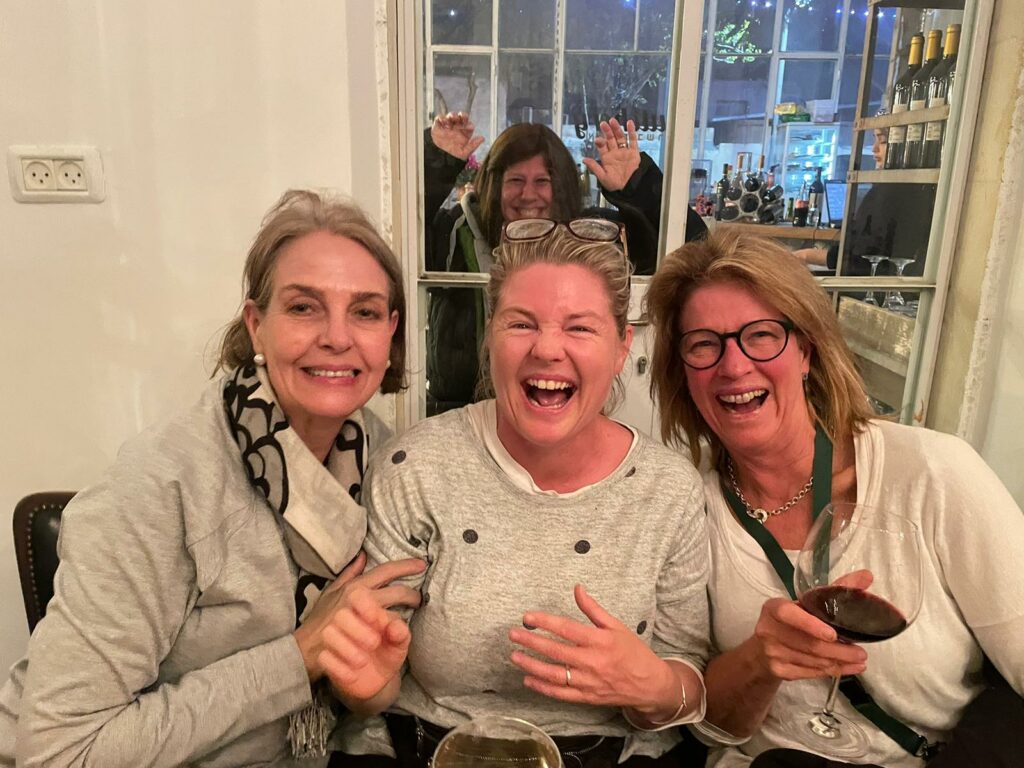 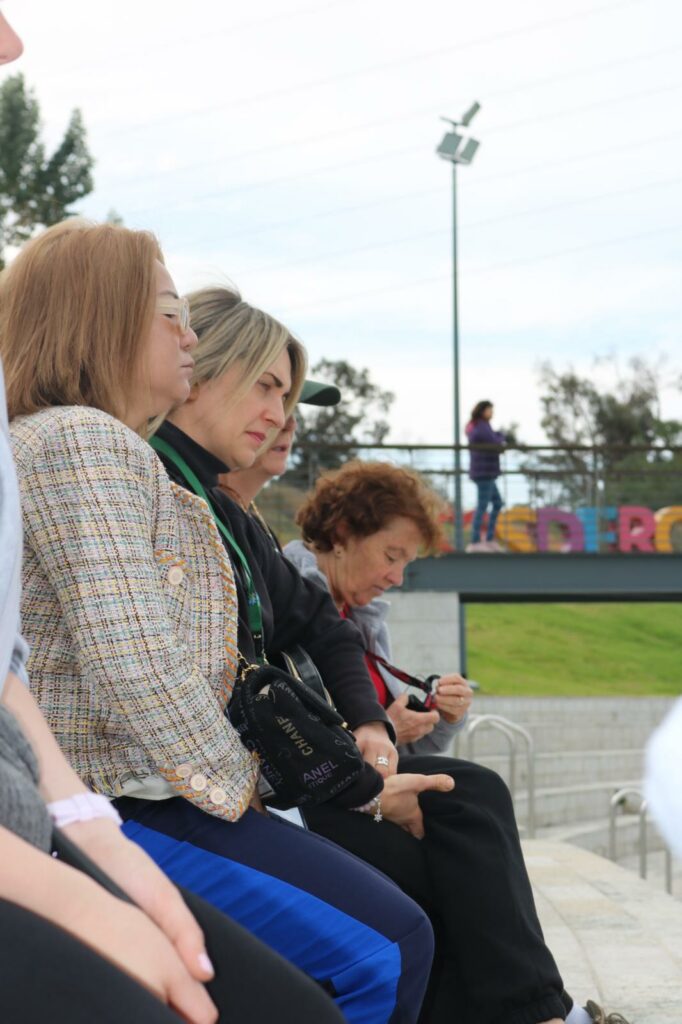 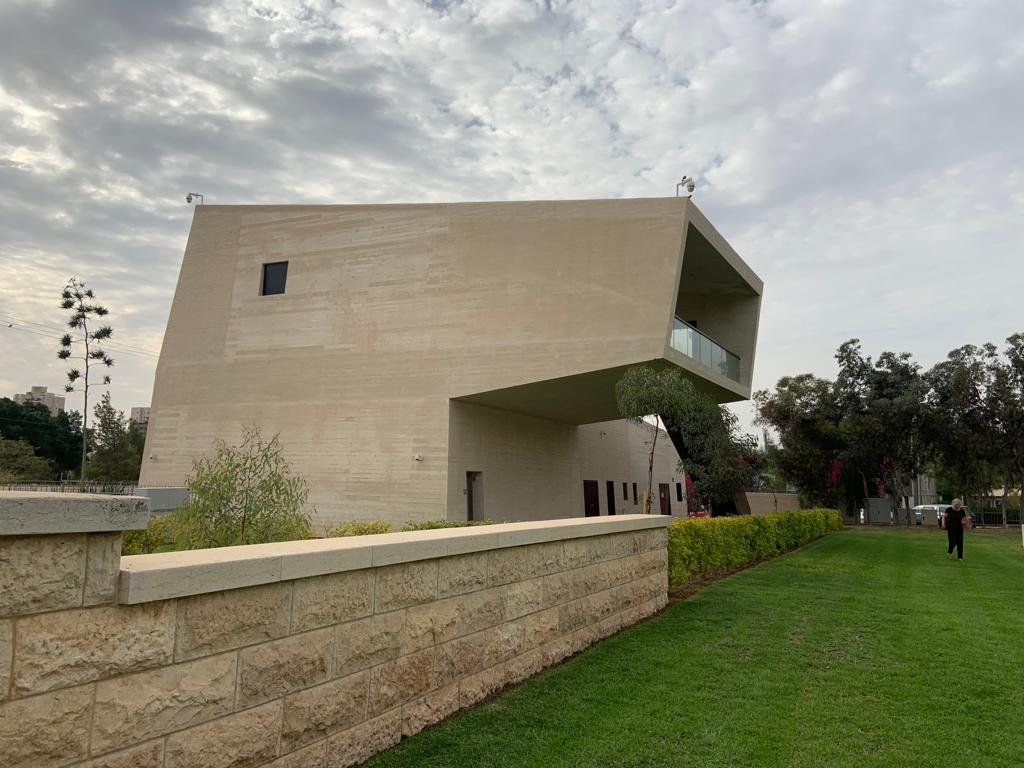